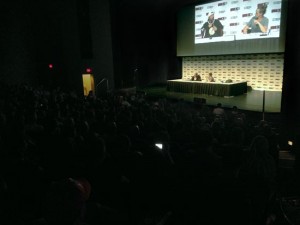 All are creatives. Some are award winning super heroes in their own right. All had some funny, compelling and interesting stories about their work.

My favourite part. The one thing that stitched all of the panels together was their answer to the same question: “What advice do you give to a student of … acting … writing … illustration … directing … etc.”

Their answers were generally the same.
1. Keep learning your craft.
Take courses from the masters. Learn many different aspects of your art and find your unique niche.
2. Accept that you’ll get turned down.
A lot. That was excessively clear. They’d each received piles of rejection letters or just flat out rejections.
3. Never give up. Never, ever, give up.
Those guys were on stage with piles of adoring fans in the audience because they had perseverance. Boat loads of it. Learn by their example. Feel sorry for yourself for a second, then turn that frown upside down and move on to the next project or the next audition with a new lesson behind you. 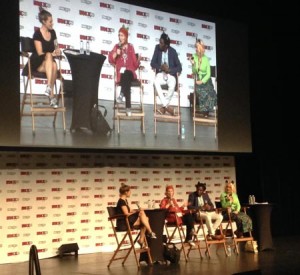 Determination is key. How many of us have felt like giving up after that last rejection letter? How many of us just get tired of how tedious and hard the work is? How many of us are frustrated by people’s lack of respect for what we know is really hard work? Wether you’re an actor or an illustrator, your craft is a passion, and it is work. It’s art work.

As one who has often felt like my work is simply not good enough, and as one who has definitely felt like quitting after that last rejection letter to a deeply personal piece of art, I yell out to my fellow artists, “Never Give Up! Never Surrender!”

Why? Because the work of our souls is of greater importance than choosing the mundane life of nothing more than paying the bills.

“Never quit! Never, ever, give up,” said actress Gillian Anderson. And writer Frank Miller. And all the rest who never gave up and who still don’t.

Listen to them. They know what they’re talking about.